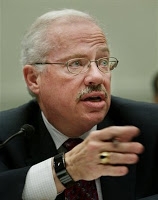 Former Georgia Rep. Bob Barr, the architect of the Defense of Marriage Act, has written an editorial in the Los Angeles Times calling for its repeal.

I’ve wrestled with this issue for the last several years and come to the conclusion that DOMA is not working out as planned. In testifying before Congress against a federal marriage amendment, and more recently while making my case to skeptical Libertarians as to why I was worthy of their support as their party’s presidential nominee, I have concluded that DOMA is neither meeting the principles of federalism it was supposed to, nor is its impact limited to federal law.

In effect, DOMA’s language reflects one-way federalism: It protects only those states that don’t want to accept a same-sex marriage granted by another state. Moreover, the heterosexual definition of marriage for purposes of federal laws — including, immigration, Social Security survivor rights and veteran’s benefits — has become a de facto club used to limit, if not thwart, the ability of a state to choose to recognize same-sex unions.

Even more so now than in 1996, I believe we need to reduce federal power over the lives of the citizenry and over the prerogatives of the states. It truly is time to get the federal government out of the marriage business. In law and policy, such decisions should be left to the people themselves.

In 2006, when then-Sen. Obama voted against the Federal Marriage Amendment, he said, “Decisions about marriage should be left to the states.” He was right then; and as I have come to realize, he is right now in concluding that DOMA has to go. If one truly believes in federalism and the primacy of state government over the federal, DOMA is simply incompatible with those notions.

Barr ran for president last year as a Libertarian.

Previous Obama Appoints Gay Man To Head Office Of Management And Administration
Next What’s The “One More Thing”?