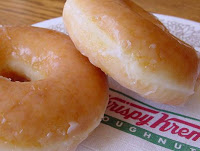 Celebrate Obama With An Abortion Donut! The anti-abortion mob is going wacko-ballistic because Krispy Kreme is celebrating Obama’s inauguration by giving away “Freedom Of Choice” donuts. From the Catholic-run American Life League:

KRISPY KREME CELEBRATES OBAMA WITH PRO-ABORTION DOUGHNUTS
“The next time you stare down a conveyor belt of slow-moving, hot, sugary glazed donuts at your local Krispy Kreme you just might be supporting President-elect Barack Obama’s radical support for abortion on demand – including his sweeping promise to sign the Freedom of Choice Act as soon as he steps in the Oval Office, Jan. 20. Just an unfortunate choice of words? For the sake of our Wednesday morning doughnut runs, we hope so. The unfortunate reality of a post Roe v. Wade America is that “choice” is synonymous with abortion access and celebration of ‘freedom of choice’ is a tacit endorsement of abortion rights on demand. President-elect Barack Obama promises to be the most virulently pro-abortion president in history. Millions more children will be endangered by his radical abortion agenda. Celebrating his inauguration with “Freedom of Choice” doughnuts – only two days before the anniversary of the Supreme Court decision to decriminalize abortion – is not only extremely tacky, it’s disrespectful and insensitive and makes a mockery of a national tragedy. A misconstrued concept of “choice” has killed over 50 million preborn children since Jan. 22, 1973. Does Krispy Kreme really want their free doughnuts to celebrate this “freedom.” As of Thursday morning, Communications Director Brian Little could not be reached for comment. We challenge Krispy Kreme doughnuts to reaffirm their commitment to true freedom – to the right to life, liberty and the pursuit of happiness – and to separate themselves and their doughnuts from our great American shame.”

I would totally have an abortion in return for a dozen hot delicious Krispy Kremes, my single favorite food in the world.(Via Louise @ Pam’s House Blend)