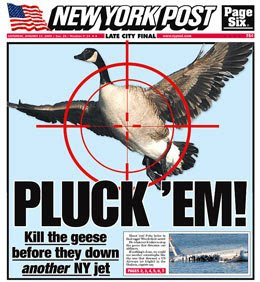 The New York Post is calling for an intifada against the Canadian geese who are wrongfully occupying the Gotham Strip.

It’s time to kill the geese. It’s especially time to kill those geese most likely to wreck another jet airliner, much as a gaggle of Canada geese seems to have brought down US Airways Flight 1549 Thursday. This time, all 155 passengers and crew were lifted from the icy Hudson River – an extraordinarily exceptional outcome. Next time? Who knows. Canada geese are a serious threat to human life and property – not to mention a major pain to pedestrians, motorists and folks who just like to spread a picnic blanket in a park. Obviously, the official cause of the crash won’t be declared for a while. But nobody doubts that it was what pilots call a “bird strike” – just as nobody doubts that the guilty birds were Canada geese. That’s because Canada geese are everywhere – and they’re out of control.

The real problem is the pound of droppings left every day by each of the estimated 25,000 geese that reside in NYC.

RELATED: Stand by for PETA’s outraged press release: “Save the sky puppies!”