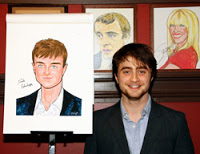 — Equus star Daniel Radcliffe had his caricature added to the walls of Sardi’s this week. The show closes on Feb. 8th.

— Tom Wopat returns to the cast of Chicago on Feb. 16th.

— Freebie: Spring Awakening’s Duncan Sheik performs tonight at the Lincoln Center Barnes & Noble at 6pm. The Tony and Grammy-winning Sheik will be doing numbers from his new CD, Whisper House. — Gavin Creel (pictured right), Will Swenson, and Caissie Levy will headline the revival of Hair, which begins previews on March 6th.

— Thriller – The Musical is headed for Broadway. The plot will follow the same lines as Michael Jackson’s landmark 14-minute video and the show will include other songs from the album as well as tracks from Jackson’s Off The Wall. Director John Landis is suing for 50% of all profits derived from his creation of the music video, saying that Jackson and his Broadway backer do not have the rights to the concept. Previous Survivors Gelt
Next The Fading World Of Lesbian Separatists