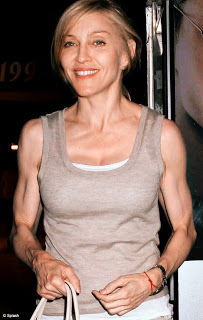 British tabloid The People claims to have “infiltrated” a radical Islamist website and learned of threats to have Madonna beheaded for her devotion to Kabbalah. According to the publication, Madonna has responded to the threat by increasing her security.

Madonna has urgently beefed up her family’s security after being targeted by Muslim fanatics seeking revenge for Israel’s attacks on Gaza. One Palestinian terrorist chief has threatened to BEHEAD the superstar who is a dedicated member of the Jewish Kabbalah sect. Madonna is also desperately worried for the safety of her children Lourdes, 12, Rocco, eight, and adopted David Banda, three. We can reveal the 50-year-old singer has now…Got two ruthless Israeli former secret service agents to beef up her security. Warned her ex-husband Guy Ritchie his home in busy central London is vulnerable to attack when he has the kids. Told him to MOVE to a more secure pad where the children will be safe.

On the notorious Islambase site, a Palestinian terror leader says: “If I meet these whores I will have the honor to be the first one to cut the head off Madonna if they will keep spreading their satanic culture against Islam.” The vile threat was made by Muhammad Abdel-Al, leader of the Popular Resistance Committees – a fringe group of Palestinian militia who have launched thousands of rocket attacks on Israel. Another misspelt rant on Islambase says: “What can be done to stop kuffars like maddona supporting the killing in Gaza?” On another site called Ummah a fanatic naming himself Hammed10 writes: “Madonna is a disgrace. “She insults us with her slutty behaviour and then she insults us further with her love of the Jewish kuffar non-Muslims.

If this story is true, these guys can’t be very clever if a gossip rag can infiltrate their message board. Over on WorldNetDaily, wingnuts are claiming to uncovered the threats against Madonna over a year ago.

Previous How To Get Re-Elected: Support Marriage Equality
Next Maine Goes For Marriage