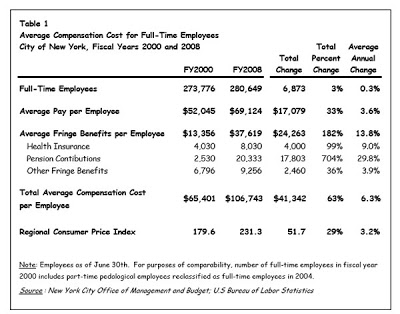 Surprising nobody, new data reveals that health costs and other benefits are wreaking havoc on NYC’s budget. Average salaries for NYC employees went up 33% since 2000 (very comparable to the 29% inflation rate since then), but the cost of employee benefits soared 186%. Overall compensation cost has risen 66% in just eight years. The NY Post points out that the salaries on the above chart are averages that include very low level employees.

Firefighters, whose contracts call for built-in overtime and 20-year retirements, ‘cost’ an average of $186,464 each. Cops, with similarly generous benefits, came in at $164,045. Teachers and other instructional personnel averaged $98,505. The remaining civilian workers brought up the rear at $83,279.” The CBC’s Carol Kellerman tells the NY Times, “These skyrocketing costs are stunning, and they impose an enormous, and growing, burden on increasingly strained taxpayers. Corrective action is essential and can no longer be delayed.”

Some of this is attributed to Mayor Bloomberg’s generous policies and contract re-negotiations, but his office says the mayor supports pension reform but can’t do anything about it without the state’s action (Governor Paterson has more recently promised to help). Mayoral spokesman Marc LaVorgna added, “Rapidly rising [health care] costs are not unique to New York City government. That’s a national problem and there’s really not a local solution to what’s a national health care problem.”

You can view the salaries of all NYC positions here.