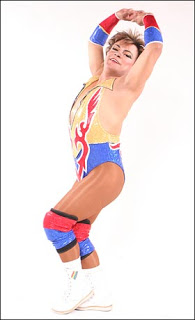 The Queen Of The Ring He’s a gay Lucha Libre wrestler who enters the ring wearing pantyhose and a woman’s bathing suit.Yet grappling fans everywhere, from his home country of Mexico to right here in the UK, can’t get enough of Cassandro. The self-proclaimed ‘Queen of the ring’ is back in Britain as one of 16 stars who will be performing on Lucha Libre London at the Roundhouse from December 6-9. And he says that while some in the venue may boo him to begin with they will all be begging for kisses by the end.

In an exclusive interview, Cassandro told The Sun: “I am what’s known in Mexico as an Exotico – a gay man who wrestles in drag. Exoticos have been in Mexican wrestling for a long time, since the 1950s, but I gave them a new touch.I brought the pantyhose, the bathing suits, the feathers, the rhinestones and the glitter – all the glamour. I made it more fun for the people and they responded by taking me into their arms and under their wings.The fans love it!”

The 20-year veteran added: “I get both cheers and boos from crowds. When I first walk down the aisle, to go to the ring, people start whistling at me, calling me names and saying: ‘What is that?’ But once they see me doing my Lucha Libre, they forget about the gay thing. In fact after the match they bow at me and even ask for kisses and hugs! It proves that you should never judge before you actually meet somebody.”

Anybody remember Gorgeous George? Even my Marine dad loved him.