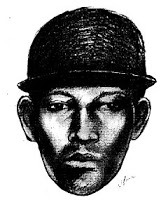 Contrary to widely published reports yesterday, the more seriously injured brother of the two attacked in Brooklyn is not dead, but he has been found to have no brain function. The New York Times has amended the story I linked yesterday.

Today the NYPD released the sketch at left in the hopes the public can identify the assailants.

Police have released a sketch of one of four suspects of an Ecuadorean man left brain dead after a savage beating in Brooklyn, where attackers hurled anti-gay and anti-Hispanic slurs. At a news conference yesterday afternoon, the family of Jose Sucuzhanay, 31, said they still held out hope.

“He’s not dead,” Diego Sucuzhanay, one of his five brothers, said at Elmhurst Hospital Center in Queens, where Jose had been listed in critical condition yesterday after surgery. “There are some decisions that need to be taken,” he continued. “We are brothers and we do not have the power to make that decision.” Sucuzhanay’s parents are in Ecuador .

Community leaders and city politicians called for the attackers’ swift arrests. Sucuzhanay suffered severe head trauma in the 3:30 a.m. beating Sunday in Bushwick. Police yesterday asked for help in locating one suspect, described as a male about 6 feet tall and between 18 and 20 years old, wearing a dark baseball cap, a black leather jacket, dark jeans and boots. A $22,000 reward is also offered for information leading to the attackers’ arrest. Police asked the public to call 800-577-TIPS.

There will be a candlelight vigil at the scene of the attack on Sunday at 8pm.