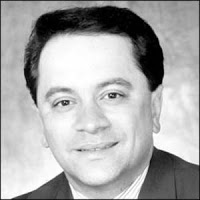 In a backroom deal that Democrats are somehow hailing as a breakthrough, anti-gay Sen. Pedro Espada Jr. will become Majority Leader of the New York Senate. One of the “Gang Of Three” dissident Democrats that had threatened to hand the leadership over to the GOP, Espada opposes same-sex marriage and wants to the issue put to voters in a referendum.

Under the GOP, marriage equality was not allowed to come to a vote in the Senate. With Espada at the helm, even with the Democrats running the show, it is now definite that we will not see a vote on marriage equality in the next session.

A bill to legalize same-sex marriage will not be brought to the floor of the Senate for a vote this year. Malcolm Smith will announce that he does not believe the measure has sufficient votes to pass – a statement that is at this point undoubtedly true, [JMG: Not all agree.] although it’s unclear how long that will last if, as Democrats are hoping, the prospect of being in the minority leads to mass GOP retirements.

Under the power-sharing terms of the deal, a planned change in the Senate rules will allow formerly presumptive majority leader Malcolm Smith (D) to be the Senate’s president pro tempore, with Espada becoming Majority Leader and the most powerful Latino politician in the state. Under the GOP, both positions were held by the now-retired Sen. Joe Bruno. Reportedly, Espada will also become vice chairman of the Senate Rules Committee, the last stop for a bill before it is presented to the full Senate for a vote.

And it doesn’t stop there. Anti-gay Sen. Carl Kruger, another of the “Gang”, will get the plum position of chair of the Senate Finance Committee, a job the GOP had offered Kruger as enticement for him to switch parties. Kruger will get his own multimillion dollar budget and “increased autonomy” in the job. Yes, that’s how we do things here in New York – you fuck us over and WE give a high profile job and a few million dollars to play with.

UPDATE: The Empire State Pride Agenda responds to the news:

This afternoon, additional rumors began circulating in the press regarding discussions about a timeline for marriage equality legislation during the State Senate leadership negotiations. We have been told several times by the Democratic Senate Leadership that marriage equality legislation will come to the Senate floor for a vote once we have enough votes to pass the bill. We have no reason to believe that this has changed.

In response to these recent rumors, we have released the statement below. We will continue to update you on this issue.

December 4, 2008 – “We are still awaiting the final details of the announced State Senate leadership deal. We would expect that any rumors that marriage equality was somehow a part of this deal are just that—rumors. Civil rights should never be a bargaining chip in any political leadership battle, and we would be outraged if the issue of marriage equality was even part of the discussions.”