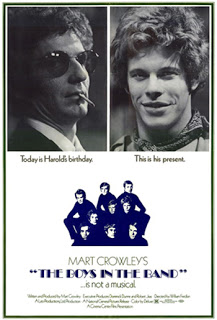 Nextbook On The “Jew Fairy” Jewish culture site Nextbook dissects Boys In The Band and its “Jew fairy” character Harold, noting the interesting parallels between the gay and Jewish worlds and how both deal with the issues of assimilation and acceptance with self-deprecating humor.

Harold may not be entirely at ease with either his sexual or religious identity, but he refuses to downplay or mask either—that phrase “Jew fairy,” barely a pause between, acknowledges bigotry and persistent self-loathing at the same time it defies both. At the party’s end, Donald, another partygoer, says he hopes to see Harold again soon. “Yes,” Harold answers, “Maybe next Shavuous?”—not Passover, or Rosh Hashanah, but a reference that hints at Harold’s religious upbringing while leaving Donald (and many audience members) outside. However Harold might actually feel about himself, his humor provides a crucial mode of resistance and resilience—a way of accepting and performing identity while still holding it at a critical distance. One can see a similar strategy on display in Portnoy’s Complaint or the stand-up of Lenny Bruce, as well as the camp humor of later gay artists such as John Waters, Charles Ludlam, and even Tony Kushner. Reviewing the play in the New York Times, Clive Barnes went as far to call the “New York wit” “little more than a mixture of Jewish humor and homosexual humor seen through the bottom of a dry martini glass,” though he never considers what Jewish and gay humor might have in common—namely, a half-mocking performance of identity that cuts to the punchline before anyone else can.

From its first release until today, many gays have loathed Boys In The Band, finding the supremely unhappy characters a grim stereotype of gay culture. Looking at some the reviews of this month’s long-overdue DVD release, however, I’m seeing more praise for the film, perhaps merely as an artifact of a darker time.