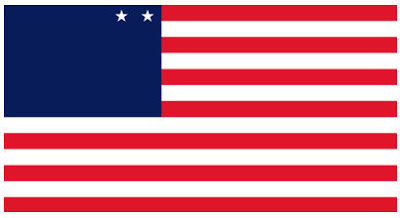 Opinions? I like that the field of stars will grow with each victory. Source. Can anybody ID the flag’s creator? The person who pointed me to it on Facebook a couple of days ago has not yet responded about that.

UPDATE: The flag is the creation of JMG reader Mark, who writes to explain.

The flag is based in the custom of 19th century suffragettes. At their annual convention they would add a star to the flag for each state that had adopted a women’s right to vote. Although there is no official order – the stars are generally read right to left in the order they were admitted to the Union. Represented are – Massachusetts and Connecticut.