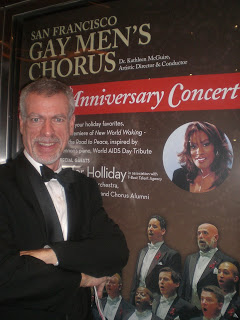 At Davies Symphony Hall on Monday night, I attended the sold-out world premiere of Steve Schalchlin’s New World Waking!, performed by the San Francisco Gay Men’s Chorus on their 30th anniversary, with Jennifer Holliday appearing as their guest vocalist.

I was there because I’ve been a huge fan of Steve’s work for years, but also (as I semi-bragged here) because the third song in the work was Joe’s Song: Dead Inside. I’m going to bet that this is only time you’ll find the words “Inspired by the writings of blogger Joe.My.God” in a symphony program.

The evening began with a cocktail reception featuring a performance by the Lollipop Guild (a small ensemble of chorus members), then the start of the show had to be delayed because of the long lines at the box office. “My” song was amazing and I managed to hold it together even though I could feel people looking at me during its performance. (You really should read Steve’s excellent recap of the evening.)

But like many in the audience, I lost it during the two songs dedicated to two mothers, Gabi Clayton and Carolyn Wagner, whose sons were the victims of anti-gay violence. Together they founded Families Against Hate and were in the audience and recognized from the stage, to many tears. Here’s Steve’s backstage video of the women meeting the chorus members. There’s a few laughs in the clip, but you should get a hanky.

Via Bev Syke’s Funny The World, here’s a short montage of the world premiere of New World Waking!

Here’s a short slideshow of the evening. Full-screen versions plus captions are here.

It was an amazing evening, a total triumph for Steve Schlachlin and the chorus. I was deeply honored to have been a small part of it.