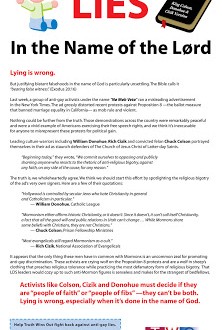 Lies In The Name Of The Lord Wayne Besen’s Truth Wins Out has taken out a full-page ad to appear in tomorrow’s Salt Lake City Tribune to counter the anti-gay Beckett Fund ad that appeared in the NY Times last Friday. The ad uses direct quotes from the Beckett Fund ad’s cosigners in which they condemn the Mormon Church as un-Christian.

Truth Wins Out (TWO) unveiled a hard-hitting full-page ad today that will be published in The Salt Lake Tribune on Thursday, under the headline, “Lies in the Name of the Lord.” TWO’s provocative advertisement is in response to an ad by anti-gay activists in last Friday’s New York Times, that falsely portrayed protests against Proposition 8 – a ballot measure in California that prohibited same sex couples from marrying – as mob violence. The TWO ad also criticized the culture warriors who ran the Times ad under the name, “No Mob Veto,” for their disingenuous claim of religious tolerance and their posture as staunch defenders of the Mormon Church. “These anti-gay activists are crying wolf on the Proposition 8 protests, but they actually are a wolf in sheep’s clothing that preaches religious tolerance while practicing the most defamatory form of religious bigotry,” said Wayne Besen, Executive Director of Truth Wins Out. “We refuse to permit this orchestrated campaign to rewrite history, nor will we allow some of the most notorious Mormon bashers in America to pose as friends of the Latter-day Saints.” TWO exposes “No Mob Veto’s” hypocrisy, after the group wrote in the Times, “Beginning today, we commit ourselves to opposing and publicly shaming anyone who resorts to the rhetoric of anti-religious bigotry, against any faith, on any side of the cause, for any reason.” In its ad, TWO agreed to take the signers of the “No Mob Veto” ad at their word, including convicted felon Chuck Colson, Prison Fellowship; Rich Cizik, National Association of Evangelicals; and William Donohue, The Catholic League, and remind America of their past incendiary statements against other religions, particularly the Mormon church. “Activists like Colson, Cizik and Donohue must decide if they are ‘people of faith’ or ‘people of fibs’ – they can’t be both,” TWO proclaimed in its ad. “Lying is wrong, especially when it’s done in the name of God.” “There is a concerted and ongoing effort by anti-gay forces to portray peaceful marchers exercising their First Amendment rights as violent troublemakers,” said Besen. “We hope to set the record straight and refuse to let No Mob Veto get away with their blatant lies.”