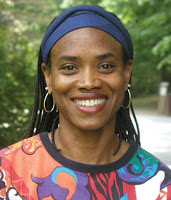 “The problem of saying ‘Gay is the new black’ poses the following problems for many African Americans:

● The Marriage Equality movement exploits black suffering and experiences to legitimate its own;

● The Marriage Equality movement’s rallying cry against heterosexist oppression dismisses its own responsibility when it comes to white skin privilege.

● The Marriage Equality movement appropriates the content of the black civil rights movement, but discards the context and history that brought about it.

“But this is not surprising because the larger LGBTQ movement has distorted, if not erased, its own history when it come to the Stonewall Riot of June 27-29, 1969 in Greenwich Village, New York City, which started on the backs of working-class African-American and Latino transgender patrons of the bar. Those brown and black LGBTQ people are not only absent from the photos of that historic night, but they are also bleached from the annals of queer history and gay pride events.

“Because of the bleaching of the Stonewall Riots, the beginnings of LGBTQ movement post-Stonewall is an appropriation of black and brown transgender liberation narratives absent of black and brown people. And it is the visible absence of these black, brown and yellow LGBTQ people that makes it harder for white queer elites in our movement to confront their racism and trans-phobia.

“If African American LGBTQ people are not included in the history and in the decision -making issues involving queer life, how then can the movement expect our participation, let alone the rest of the African American community? Sadly, if racism continues to go unchecked in the Marriage Equality movement it won’t only cost California’s LGBTQ community the right to marry, it will cost us all.” – Rev. Irene Monroe, Ford Fellow and doctoral candidate at Harvard Divinity School, writing in UK Gay News.