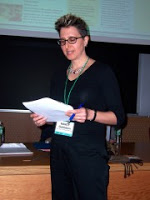 “Bitch, I’ve seen queers more fired up when Bed Bath & Beyond runs out of sale items. Where’s the passion?

“Was Van Sant afraid that audiences wouldn’t be sympathetic if 70s-era gay activists were people who suffered, swore, fought back, and fucked like they meant it? If the street kids actually looked like dirty, starving, broke-ass teen hustlers?

“Gay history — unedited — is ugly, angry, and violent. It’s police dragging us out of cellar bars and down to the station to gang fuck the femmes and face-rape the butches, queens, and trannies. It’s military witch hunts; suicides and “experimental therapies,” from lobotomies and electro-shock to Christian boot camps. It’s Stonewall, where we showered raiding police with bottles, locked them in the bar, and set it afire. It’s ACT UP and chaining ourselves to pharmaceutical companies’ fences to protest AIDS drugs price gouging.

“Van Sant’s gentrified Milk reflects gay activism’s increasingly apologetic tone. We don’t always need to be burning police cars to prove our cred, but we shouldn’t be inviting homophobes to the table, then singing their praises if they don’t spit on us. It’s not about hugging Rick Warren and being satisfied that at least he’s being nice about denying us our civil rights. Politeness has become homophobia’s most popular mask.

“Ultimately I’m glad that even this pasteurized, homogenized Milk is out there. Audiences need to see the film’s opening sequence — silent archival footage depicting police bar raids from the 40s, 50s, and 60s, with men shielding their faces from the cameras even as they are shoved into vans, handcuffed, or held in waiting rooms. I want fresh salt poured on the wounds of Proposition 8 so that queers will stop apologizing for being angry with the Mormon and Catholic Church, and for boycotting supporters. I want fresh rage directed at Barack Obama for thinking that including a gay marching band in his inauguration proceedings compensates for his having invited a notorious homophobe and anti-Semite to give the invocation.

“But I’m not sure that this low-fat film will really help audience get Milk. And I’m sorry that Van Sant didn’t think we could handle the truth.” – Nancy Goldstein, writing for the Huffington Post.