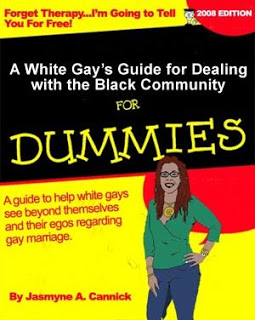 “At a time when you should be apologizing to and trying to build bridges with African-Americans after exposing your closeted racism towards us over the passage of California’s Proposition 8, you’re at it again.

“The man isn’t even in office yet and you are all up in arms over the inaugural invitation of evangelical pastor Rick Warren by President-elect Barack Obama just because Warren opposes gay marriage.

“Look—America already knows that you are unhappy with the outcome of Prop. 8…but as discussed in previous chapters, you have no one to blame for that but yourself. Instead of denouncing Obama’s choice to invite Warren, you should be hailing it as it shows a continued effort on Obama’s behalf to reach across the aisle in an effort to bring everyone to the table. You know that thing that you haven’t quite learned how to do yet.

“If no one ever told you—the world doesn’t revolve around gay marriage. If it did, let’s face it, Obama wouldn’t be the President-elect, now would he? It’s no secret that Obama isn’t exactly the poster child for gay marriage, and for the record, neither was your Hillary Clinton. However, that didn’t stop you from voting for her or me as a lesbian from voting for him. And please stop reminding us that you voted for Obama. You didn’t do us any favors, you did yourself one. There is no reward for that. Sorry.” – Jasmyne Cannick, writing on her blog.