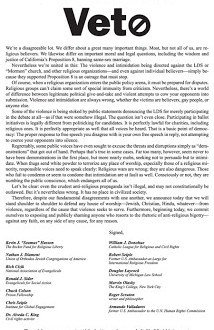 As I reported here on Tuesday, today the Beckett Fund published a full page ad in the New York Times decrying the recent protests against the Mormon Church (and others) for their support of Proposition 8.

You’ll have to embiggen the image above to read it, but the main quote is: “The violence and intimidation directed at the LDS or ‘Mormon’ church, and other religious organizations – and even against individual believers – simply because they supported Proposition 8 is an outrage that must stop.” The message is cosigned by individuals heading numerous religious groups including the Orthodox Jewish Federation and the Catholic League, as well as Martin Luther King’s niece, Alveda King.

The ad directs readers to NoMobVeto.org, which asks for signatures supporting a campaign to “expose and publicly shame anyone who resorts to the rhetoric of anti-religious bigotry — against any faith, on any side of any cause, for any reason.”

HILARIOUS! They are asking for support to do EXACTLY what WE have been doing: exposing and publicly shaming anyone who resorts to anti-gay bigotry. So it’s HATE when we do it, but OK when they do. How fucking typical.

You’ll note that they decry the “violence” of the anti-Prop 8 protests, but remain as silent as always about the uncountable brutal attacks against LGBT people which are committed EVERY DAY of EVERY YEAR by people trained by THEM to hate gay people from the moment they know what the word means.