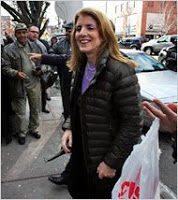 In most respects, Ms. Kennedy’s answers described views similar to those of other New York Democrats, including New York’s senior senator, Charles E. Schumer, and Mrs. Clinton. But she appears to support same-sex marriage, a significant difference between herself and Mrs. Clinton as well as president-elect Barack Obama, whose endorsement by Ms. Kennedy was a watershed event in the presidential race. “Caroline supports full equality and marriage rights for gay and lesbian couples,” the statement said.

Kennedy’s voting record raised eyebrows on Friday when it was revealed that she had not voted in about half of the elections held since she registered to vote on Manhattan’s Upper East Side in 1988.

Caroline Kennedy, who is seeking to succeed Senator Hillary Clinton, has not voted in a number of elections, including at least one race for the job she’s seeking. The Democrat registered at her current address on Manhattan’s Upper East Side in 1988. According to city Board of Elections records, she missed Democratic mayoral primaries in 1989, 1993, 1997, and 2005. She also missed the 2002 gubernatorial primary and general election, when Democrat H. Carl McCall lost to Republican incumbent George Pataki. She skipped the 1994 general election, when Senator Daniel Patrick Moynihan was running for reelection for the same seat she hopes to take over if Clinton is confirmed as secretary of state.