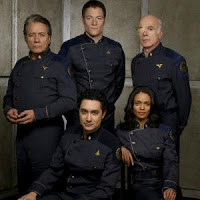 Battlestar Galactica To Out Two Characters Soap-opera-in-space Battlestar Galactica will out two characters in webisodes that will run prior to next month’s season debut. (Stop here if you don’t want to be spoiled.)

The webisodes are meant to bridge the gap between the mid-season finale and the January 16 premiere, but that’s not the only interesting thing about them. Galactica Sitrep reports that two male characters will be outed and indulge in a full-on make-out session in one of the installments.

In news that I doubt any Battlestar Galactica fan will find shocking, one of the gay characters is none other than Lt. Felix Gaeta (Alessandro Juliani). The man he’ll be seen making out with is Hoshi, who may only be known by the most faithful BSG fans. Hoshi is the former communications officer on the Pegasus, who now holds the same position aboard the Galactica. He took over Gaeta’s duties for a short time when the lieutenant was traveling with Starbuck aboard the Demetrius.

While I’m thrilled that Battlestar Galactica is showing some diversity, it’s a bit disappointing that these characters won’t be outed in an actual episode of the series. BSG fans who don’t watch the webisodes may never know that Gaeta and Hoshi made out, unless it’s somehow referenced on the show. Then again, with only 10 episodes left and BSG barreling toward its series finale, it’s possible there’s no time to dive into issues of sexuality.

Previous Bettie Page, 85
Next Top Evangelical Forced Out After Admitting He Is “Shifting” On Gay Marriage