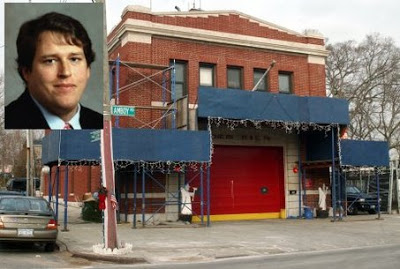 A case which dominated the NYC tabloids in early 2004 has finally been settled as a firefighter who was left with permanent injuries after being smashed in the face with a metal chair has agreed to accept $3.75M from the city. The firefighter claimed that the brawl was the culmination of the two years of anti-gay slurs he’d suffered as firehouse supervisors laughed.

Firehouse banter isnt cheap anymore. The city today reached a settlement with Robert Walsh, the former Annadale firefighter who was smashed in the face with a metal chair during a New Year’s Eve fight with fellow firefighter Michael Silvestri that exploded after nearly two years of what Walsh described as being on the receiving end of anti-gay slurs.

Walsh will receive $3.75 million in damages as part of the agreement that brought an end to the former firefighters lawsuit against the city at Manhattan Federal Court in front of U.S. District Judge Robert W. Sweet. “We are pleased that the matter has been resolved amicably,” said city spokeswoman Kate Ahlers, who declined further comment “out of respect for the parties.” Walsh could not be reached for comment.