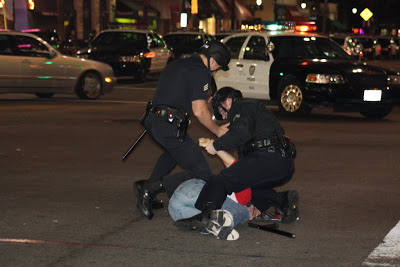 Japhy Grant has photos from last night’s Prop 8 protest in West Hollywood, where the LAPD responded in riot gear and roughed up at least one protester who wouldn’t leave the street.

After a group of 1000 protesters left a planned West Hollywood rally to protest Prop 8., they headed eat along Sunset to the CNN building and later to Hollywood and Highland. I was among the people at the front of the group and the march was peaceful and protesters were communicating and working with Sheriff’s Department, which allowed the protesters to police themselves.

Then the Los Angeles Police Department showed up, issuing a “tactical alert” calling all available officers to the scene. Things went downhill and tonight the Hollywood area is awash in SWAT teams, police helicopters and scattered reports of protesters being arrested and beaten. For the most part, what I observed was peaceful and it wasn’t until the L.A.P.D. showed up that any protesters started to get belligerent– even then, the man in the first photo below was attacked for crossing the police line formed at Hollywood & Highland. Whether the police crossed a line is a question to be asked tomorrow.