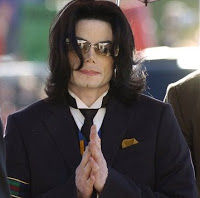 The Way You Mecca Me Feel The Sun UK is reporting that Michael Jackson has converted to Islam.

The skint superstar, 50, donned Islamic garb to pledge allegiance to the Koran in a ceremony at a pal’s mansion in Los Angeles, The Sun can reveal. Jacko sat on the floor wearing a tiny hat after an Imam was summoned to officiate — days before the singer is due to appear at London’s High Court where he is being sued by an Arab sheik.
A source told last night how Jacko, brought up as a Jehovah’s Witness, decided to convert as he used a studio at the home of his chum to record a new album. “An Imam was summoned from the mosque and Michael went through the shahada, which is the Muslim declaration of belief.” Mikaeel is the name of one of Allah’s angels.

“Jacko rejected an alternative name, Mustafa — meaning “the chosen one”. Brit singer Yousef Islam, 60 — who was called Cat Stevens until he famously converted — turned up to help Jacko celebrate. It was his pals David Wharnsby — a Canadian songwriter — and producer Phillip Bubal who counselled Jacko. The pair’s new names are Dawud Wharnsby Ali and Idris Phillips. Jacko now prays to Mecca after the ceremony at the Hollywood Hills home of Toto keyboard player Steve Porcaro, 51, who composed music on the singer’s Thriller album.

So are we buying this? It IS the Sun, after all. But then again, it IS Michael Jackson.

Previous Where Things Stand
Next 17-Story Billboard For Times Square