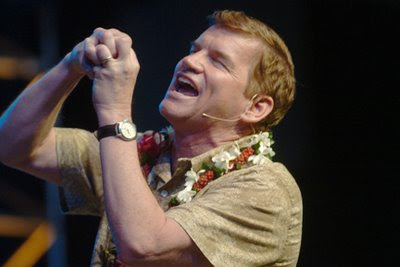 Ted Haggard: I Was Molested At 7 Yrs Old Disgraced evangelical leader Ted Haggard has “broken his silence” on the second anniversary of his downfall to say that the reason he sinned with the menz is because a man that worked for his father molested him when he was seven years old.

Haggard gave a pair of sermons at a small church in Illinois where the pastor is an old friend of his. “The first thing I want you to know is I sinned,” Haggard began. Haggard’s comments were quite revealing. They were recorded on audiotape and put on the Internet at www.tedhaggard.com. [JMG: The site is currently down.]

Haggard told the congregation that a sexual incident with a man when he was 7 years old may be related to the scandal involving a male prostitute and crystal meth use that cost him his job two years ago. “My dad was pretty successful,” Haggard said. “He had a lot of workers. One of those workers had a sexual experience with me. I was 7 years old.” Haggard said that incident stayed with him throughout his life.

Oh, right. Sorry, Ted, it’s a little too convenient that the reason you come up with is the same one that all the wingnuts point to as a primary cause of homosexuality. Not buying this for one minute.