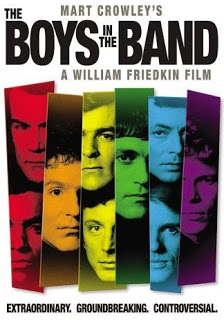 Courtesy of the Karpel Group, today’s Swag Tuesday giftie is the long-awaited DVD release of Boys In The Band, the classic and ground-breaking William Friedkin film now available nationwide.

A sensitive yet humorous adaptation of the stage play, this 1970 film directed by William Friedkin (The French Connection, The Exorcist) is one of the first films to openly address gay issues in a matter-of-fact style that largely avoids stereotyping. Shot on one set and featuring a birthday party as the festive setting, a group of friends assemble to celebrate, reminisce, and discuss their lives and the travails of being gay, even as one friend insists he’s straight. The night turns from a light celebration to a sometimes-vindictive ordeal of revelation and betrayal, as each man in turn must confess his true feelings. Performed by the original cast of the stage production, the film may feel dated to some, but it still manages to be truthful and entertaining as it explores a subject that to this day is not often addressed

Enter to win the DVD by commenting on this post. Only enter once and please remember to leave an email address you check frequently. Publicists: if you’d like to take part in Swag Tuesday on JMG, please email me.

Previous Layoffs At Focus On The Family
Next Pressure Rises Against NY Sen. Ruben Diaz Over Marriage Equality