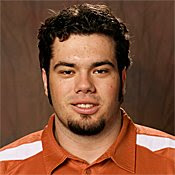 And we thought the power of Facebook could only be used for good. Mollygood reports:

Apparently this anti-Obama Facebook phenomenon is really getting out of control and, luckily, some ignorant crazies are being forced to pay the consequences. Meet Buck Burnette, a football player for the University of Texas and blatant racist. Shortly after the election, his status read: “all the hunters gather up, we have a #$%&er in the whitehouse.” Classy guy, that Buck. As you can imagine, coach Mack Brown kicked him off the team immediately. Buck then issued an apology that was obviously not written by him.

Clearly I have made a mistake and apologized for it and will pay for it. I received it as a text message from an acquaintance and immaturely put it up on facebook in the light of the election. Im not racist and apologize for offending you. I grew up on a ranch in a small town where that was a real thing and I need to grow up. I sincerely am sorry for being ignorant in thinking that it would be ok to write that publicly and apologize to you in particular. I have to be more mature than to put the reputation of my team at stake and to spread that kind of hate which I dont even believe in. Once again, I sincerely apologize.