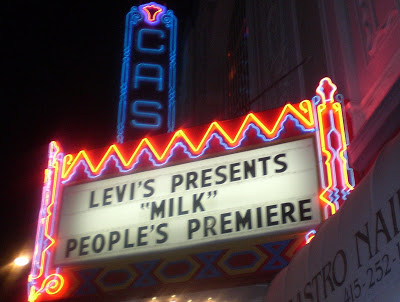 The People’s Premiere Of Milk Last night at the Castro Theater I attended the “People’s Premiere” of Milk, the Harvey Milk biopic by Gus Van Zant that opens nationwide on November 26th, the day before the 30th anniversary of Milk’s assassination. My longtime buddy Robert Cameron is the VP of Brand Marketing for Levi Strauss, the presenting sponsor of this premiere, and he was kind enough to take me behind the scenes. The Hollywood red carpet premiere was two weeks ago, but this one was a thank you to the Castro and its many residents who appeared as extras in the film. Tickets were distributed to local community organizations, Castro merchants, and San Francisco city leaders. ABOVE: After the ribbon cutting, LGBT liaison Alex Randolph presented the Levi’s honchos with a certificate of honor for the company’s contributions to San Francisco’s LGBT community. ABOVE: Yours truly and Levi’s VP Robert Cameron at the Castro Theater. ABOVE: These folks had something to do with the premiere. I’m not sure what, exactly, but who cares? They were fabulous. ABOVE: One of the grandest and gayest traditions in American theater is when the Mighty Wurlizter organ rises from beneath the Castro Theater for a pre-show performance. The set always closes with San Francisco (Open Your Golden Gate) and the audience always claps and sings along and I always tear up. Last night – no exception.

Afterwards, Levi’s president Robert Hanson and SF Supervisor Bevan Dufty took the stage to list all the ways Levi’s has supported the LGBT community: Over $35M donated to HIV/AIDS, the first Fortune 500 company to offer domestic partners benefits, supporting a trans-inclusive ENDA, and most interestingly, their being the only corporation to file an amicus brief on behalf of No On 8.

And No On 8 is what Milk is almost accidentally really about, as it tracks Harvey Milks rise to power and his fight against 1977’s Proposition 6 (the Briggs Initiative), which was the attempt by Anita Bryant and her ilk to outlaw homosexuals from teaching in California’s public schools. Here we are more than 30 years later and the parallels are vivid and heartbreaking. I’m not going to give away too much of the film, you know what it’s about and how it ends, but I will say that I was surprised at how easily I bought Sean Penn as Harvey Milk – his is a masterful performance and certainly worthy of all the Oscar buzz we’ve been reading.

ABOVE: Milk screenwriter Dustin Lance Black is interviewed by the local press after the screening. Black told me he was elated by the response of the Castro audience, moreso than the Hollywood premiere because the audience was so invested in the No On 8 campaign and was so struck by the similarities in Milk. The crowd was extremely responsive – hissing at Anita Bryant and Diane Feinstein and giving a standing ovation at the close of the movie. I was completely verklempt by the end and so very grateful to have seen it at Gay Ground Zero. ABOVE: After the film, we moved over to Lime for the afterparty, where SF Supervisor Bevan Dufty (who is a fucking riot) posed for me with two of the “Milk Men”, James Williams (left) and Ron Shuman (right). ABOVE: At the afterparty I chatted with Paper Magazine editor-in-chief Kim Hastreiter and Levi’s Executive Director of Overall Daddy Hotness Len Peltier. Len and I played the “you must know so-and-so” game for thirty minutes but never figured out where we’d met. Dammit. ABOVE: The fabulous Mark Martinez played disco diva Sylvester in the film. Mark attended the screening with his mother, who pointed at him and said to me, “That’s MY son!” Well done, Mom. I got to tell Mark about the time that I met Sylvester at Fort Lauderdale’s Marlin Beach Hotel in the early 80’s. I’ll have to blog that story sometime. ABOVE: It would a sin not to include this other pic of Milk man James Williams.