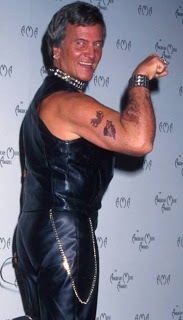 “Marriage itself, the sacred institution around which all society is built, is being attacked and shaken. Yes, attacked with intent to contaminate it in a way that will eventually cause the collapse of American social order.

“The first time the Islamic jihadists tried to destroy the WTC, they did it the smartest way – they attacked the foundations, down in the subterranean garages, planting huge bombs that would surely have toppled the massive buildings. But they were foiled at the last minute, and had to try again. So on Sept. 11 in 2001, 23 trained and disciplined terrorists attacked the Towers at a much higher and totally unexpected level. They commandeered some jetliners, filled with unsuspecting passengers, and plunged them into the upper floors of the Towers, accomplishing the unthinkable. Two giant buildings, with thousands of people in them, crumpled to the ground in cataclysmic annihilation.

“And now a much greater shaking is affecting our national life. In a terrible pincer movement, an assault is taking place on two fronts simultaneously – one all-out attack on the foundations, the very pillars of our society, and the other on the executive suites in the ivory towers of business and finance. The jihadists in these organized, hugely funded attacks on our morality and virtue are not Middle Eastern – they’re homegrown Americans who actually believe they’re promoting a better America by destroying the foundations on which this nation was built!

“Recall that George Washington declared, ‘Religion and morality are the twin pillars of liberty’ … two foundational supports. Well, on one front, our jihadists would grant homosexual activity ‘marriage rights’, which outweigh the will of the majority and defy the societal structuring of all human history. On the second front, leftist political genetic engineers are moving into power, taking advantage of immoral and irresponsible greed in the economy to socialize industry and finance, and make Big Brother government everybody’s boss and banker.” – Washed up pop singer Pat Boone, in a WingNutDaily column titled Thank God For Earthquakes. Marriage equality, you see, is like the first attack on the foundation of the World Trade Center, and the economic crisis is like the second attack at the top.