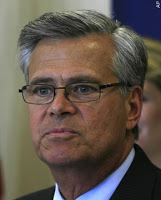 The infighting continues among Democrats over the selection of a new Majority Leader, the critical step to bringing marriage equality to a vote in New York. Things have gotten so bad that state GOP leader Sen. Dean Skelos (left) has declared that they will end up retaining the majority.

In some of his most detailed remarks since the Republican Party’s historic defeat in statewide elections last week, Senate Majority Leader Dean Skelos denied the Democrats won control of the 62-seat chamber.

The state’s top Republican said he hoped to cut a deal with three rogue Democrats and preserve GOP control of the Senate – the party’s last toehold on statewide power. “It ain’t over ’til it’s over, as Yogi used to say,” Skelos told Post State Editor Fredric U. Dicker on Dicker’s Albany Talk 1300 radio show. “The way I see it, it’s 30 Republicans, 29 Democrats and three outstanding.”

Losses by longtime Republican Sens. Serphin Maltese and Caesar Trunzo last week gave the Democrats a 32-30 majority in the chamber. But three Democrats have withheld support from party leader Malcolm Smith in hopes of securing a share of the power next year. Each of the “Gang of Three” – Sens. Ruben Diaz Sr., Carl Kruger and Senator-elect Pedro Espada Jr. – has benefited from Republican ties in the past. In the days since the election, Skelos has tried to woo the three into a coalition.

The Renegade Three Democrats are all from NYC:

All three oppose same-sex marriage, but if a Democrat is made Majority Leader, it is hoped that enough votes would come from the Republican side for the measure to be approved. If the Republicans maintain the majority, that vote will never come. Kruger said earlier this week that he wants to put the issue before the voters as a ballot measure. A poll of New York voters taken in June indicated that only 42% would support marriage equality. It’s unknown how the California debacle may have influenced New Yorkers’ opinions since then.

New Yorkers should keep these three asshat Democrats in their minds and in their chants at Saturday’s protest rally at City Hall.

Previous Not Everbody Enjoyed Last Night….
Next T-Shirt Of The Week