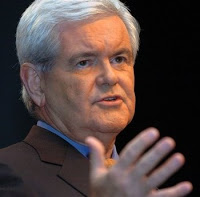 Newt Gingrich Loves All Three Of His Traditional Marriages Newt Gingrich: “I think there is a gay and secular fascism in this country that wants to impose its will on the rest of us, is prepared to use violence, to use harassment. I think it is prepared to use the government if it can get control of it. I think that it is a very dangerous threat to anybody who believes in traditional religion.

“And I think if you believe in historic Christianity, you have to confront the fact. And, frank — for that matter, if you believe in the historic version of Islam or the historic version of Judaism, you have to confront the reality that these secular extremists are determined to impose on you acceptance of a series of values that are antithetical, they’re the opposite, of what you’re taught in Sunday school.”

Apparently what Gingrich was taught in Sunday school was how to commit adultery over and over and over and marry as many times as you fee like it. Hell, he even committed adultery while he trying to bring down Bill Clinton for, uh, committing adultery.

ABOVE: Mrs. Gingrich #1, Newt’s high school math teacher whom he cheated on and served divorce papers to while she was in the hospital with cancer. Sunday school! ABOVE: Mrs. Gingrich #2, whom Newt cheated on and dumped for his congressional aide. Sunday school!

ABOVE: Mrs. Gingrich #3. Watch your back, Callista!