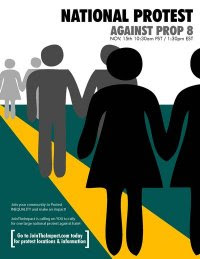 On Saturday there will be a Prop 8 protest march in DC from the steps of the U.S. Capitol to the White House. Numerous other marches will take place across the country. Via Facebook:

This is not a California issue. This is an issue of equality across America. Stand up and make your voice heard. Join us in DC on November 15 to unite our voices against H8 and other recent legislation that seeks to make second-class citizens of LGBTQ Americans!

This is a nationwide event. Every major city in America (and some around the world) will be protesting on 11/15 10:30 PST (or 1:30 EST). Regardless of what city you are in or near, there will be a protest near you.

Visit Join The Impact for an exhaustive listing of events around the country.

Rex Wockner is calling this new wave of protest “Activism 4.0“:

Maybe Stonewall was Activism 1.0, ACT UP was Activism 2.0, the failed corporate activism of HRC and No On Prop 8 was Activism 3.0, and now we are witnessing Activism 4.0 being born.

It’s virtually impossible to know you’re experiencing history in the making when you’re right in the middle of it. But our present generation with their SMS texting and their Twittering (aka “tweeting”) and their Facebooking are mad as hell over this, and it’s lookin’ to me like they’re not going to take it anymore.

I sense the power could be shifting, from the suit-and-tie professional activists with their offices, their access, their press releases and their catered receptions, to the grassroots. And come to think of it, what was Obama’s victory but the victory of the grassroots?

So, if what I think might be happening is happening, the timing makes total sense. I guess we’ll know Saturday once we get back from the events and log on and see what happened across America.