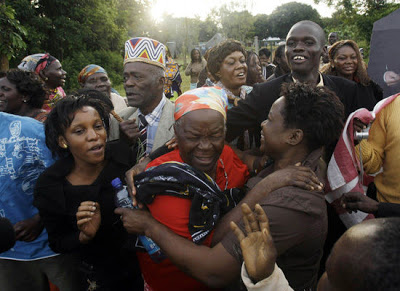 Obama’s Kenyan relatives erupted in celebration as the election results came in early Wednesday morning, and they proceeded to march through the streets singing “We are going to the White House!” [See the celebration above.] Agence France-Presse reports that Kenya has declared a national holiday in honor of Obama’s election: “This is a momentous day not only in the history of the United States of America, but also for us in Kenya,” President Mwai Kibaki said in a statement, according to AFP. “The victory of Senator Obama is our own victory because of his roots here in Kenya. As a country, we are full of pride for his success.”

The woman in red is Obama’s step-grandmother.