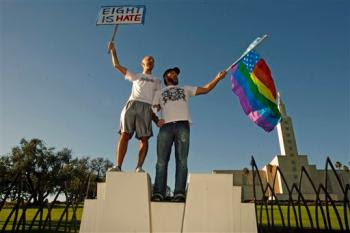 More than a thousand gay-rights activists gathered Thursday afternoon outside the Mormon temple in Westwood to protest the role Mormons played in passing Proposition 8, which banned same-sex marriage in California. It was the latest in an escalating campaign directed against the Church of Jesus Christ of Latter-day Saints for its role in marshaling millions of dollars in contributions from its members for the successful campaign to take away same-sex marriage rights.

Church officials made few public statements during the campaign. On Thursday, they issued a statement asking for “a spirit of mutual respect and civility.” “The Church acknowledges that such an emotionally charged issue concerning the most personal and cherished aspects of life — family and marriage — stirs fervent and deep feelings,” church spokeswoman Kim Farah wrote in an e-mail. “No one on either side of the question should be vilified, harassed or subject to erroneous information.” She did not elaborate. Outside the Los Angeles temple Thursday, dozens of protesters screamed “Bigots” and “Shame on You” at half a dozen men in button-down shirts and ties who looked out at the demonstration from behind the temple’s closed gates.

The LA Gay & Lesbian Center has set up a website called InvalidateProp8.org to solicit donations to fund the overturn of the referendum.

Send a message to the Mormon Church, whose members raised more than $15 million to fund the deceitful advertising campaign for Proposition 8, the initiative that takes away the right to marry for same sex couples in California!

Make a donation, in the name of the president of the Mormon Church, to support the legal organizations working to invalidate Proposition 8 and to fund grass-roots activities in support of full marriage equality. For every donation of $5 or more, the L.A. Gay & Lesbian Center will send the following postcard to President Thomas Monson’s office in Salt Lake City, acknowledging your donation in his name:

A donation has been made in your name by _________________ to “invalidateprop8.org” to overturn California’s Proposition 8 and restore fundamental civil rights to all citizens of California. The money will be donated to legal organizations fighting the case and to support grass-roots activities in support of full marriage equality. Although we decry the reprehensible role the Church of Jesus Christ of Latter Day Saints leadership played in denying all Californians equal rights under the law, we are pleased a donation has been made on your behalf in the effort to overturn the discrimination your church members helped enshrine in the California Constitution. Given that throughout its history the Mormon Church has been subjected to bigotry, we hope you appreciate the donation in your name to fight religious bigotry here in California.

Let’s work to overturn Prop. 8 while sending a message to the Mormon Church that it’s wrong for any organization to exert political influence to deny the civil rights of any group!

Previous Video: Last Night’s Arrests At Prop 8 Protest In West Hollywood
Next Obama Win Leaves Supporters With Nothing To Fill Their Empty Lives