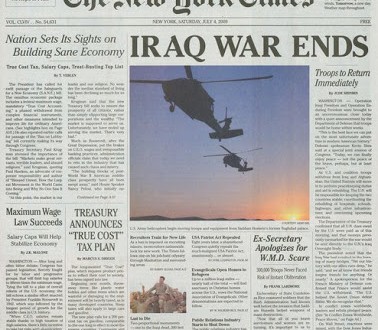 The Iraq War is over, according to the fake New York Times! This morning a cadre of volunteers has fanned out across New York City to pass out a remarkably good, faux-copy of the Times dated July 4, 2009. They’ve even set up an entire website. Universities to be free! Bike paths to be expanded! Thomas Friedman to resign, praise the Unitarian Jesus! It’s not funny like The Onion, but obviously a lot of work went into this.

According to Gawker, the prank is the work of The Yes Men, but their site is either down or overloaded. Did anybody here get a copy of the fake paper?