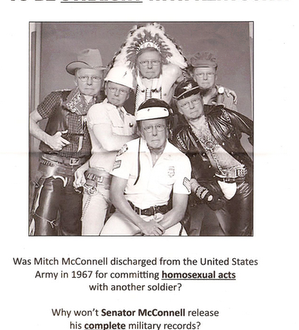 In an uncharacteristic turn, this time it’s the Democrats that are gay-baiting a candidate, accusing famously anti-gay Sen. Mitch McConnell (R-KY) of being a closet case via this Village People ad.

With prominent exceptions (the inquisition over Mark Foley and the anti-gay witch hunt that followed, Bill Clinton’s touting his support for the Defense of Marriage Act on Christian radio stations), gay-baiting has been a Republican, rather than a Democratic, tactic. It is to John McCain’s enormous credit — not that you would ever hear it from his newfound critics in the media, who turned on him once he went from being a thorn in the side of Republicans to the one man standing in the way of Barack Obama’s becoming president — that anti-gay rhetoric has not played a role in this election. Too bad Democrats are picking up the slack.

Yes, the people pushing it are no doubt trying to appeal to homophobia in many voters. But they are also appealing to my — and presumably many Kentucky voters’ — desire not to have a hypocrite and liar in office. And that’s not a bad thing. Sorry, but I have little sympathy for the antigay McConnell, and certainly people should know if indeed he is some tormented closet case.

Since McConnnell is a senator who has voted antigay over and over again, it’s certainly relevant to ask the question if things just don’t add up, and there’s nothing wrong with implying someone is gay or asking the question, is there? And if McConnell is not, and there is some other truth to his discharge, why not just state it?