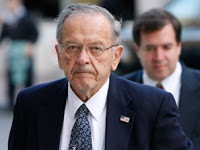 The people of Alaska must have been smoking something.

Alaska Sen. Ted Stevens was leading challenger Mark Begich with most of the election returns in hand Tuesday night, despite being found guilty of seven felonies and polls showing him in deep trouble. With more than 80 percent of the precincts reporting, Stevens held a 2-percentage point advantage over Democrat Begich.

About 4,000 votes separated the candidates. The razor-thin margin means the Senate race might not be decided for two weeks. Still to be counted are roughly 40,000 absentee ballots, with more expected to arrive in the mail, as well as 9,000 uncounted early votes and thousands of questioned ballots. The state Elections Division has up to 15 days after the election to tally all the remaining ballots before finalizing the count.

If the lead holds, Stevens will shock the nation and be the first person ever re-elected to the U.S. Senate after being found guilty on criminal charges. Polls had shown the Republican down by at least 8 percentage points on the day before the election.

Most expect the Senate to expel Stevens if he wins, which will open his seat for a special Palin-friendly election. Sen. Sarah Palin. Get ready for it.

Previous Lieberloser
Next Gotham’s Newspapers Are Sold Out