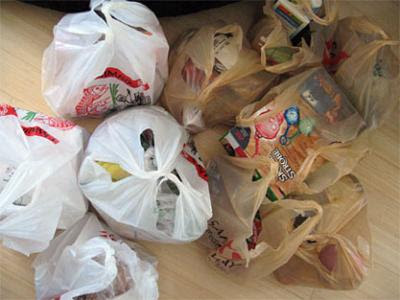 Mayor Bloomberg hopes to help the city’s budget woes (oh, also: the environment) by instituting a five to ten cent tax for every plastic bag issued by Gotham’s stores.

The controversial charge could raise at least $16 million for the cash-strapped city while keeping tons of plastic out of landfills, city officials said Thursday – but some outraged shoppers aren’t buying it. “Bloomberg is a piece of work,” Clemelda Gipson, 39, said outside a D’Agostino grocery store in Chelsea. “Food is expensive and now we have to pay for the bags, too? They should try to come up with ideas and solutions and not just more taxes.” Others said they would bring their own cloth bags rather than pay more at the store. “I think it’s a good idea. There is way too much plastic being used at the grocery stores anyways,” said actress Denise Lute. “We need to be eco-conscious. If I’m charged a nickel it’ll make me take my own bag.”

New Yorkers use an estimated 1 billion plastic bags per year. City officials aren’t sure what bags they plan to tax, or how they’d collect it – though they’re considering allowing merchants to charge an extra penny per bag, giving them an incentive to track it. “They’re charging sales taxes already. There’s not some massive new overhaul or bureaucracy that’s needed,” said Rohit Aggarwala, Bloomberg’s head of environmental affairs. “We are hoping that at 6 cents a bag, people would change their behavior.”

San Francisco already bans non-biodegradable bags, while Ireland taxes every plastic bag at 33 cents – a move that has reduced their use by 94%, usually in favor of canvas totes. But with most of us here in Manhattan being car-less, we’re less likely to be toting around canvas bags for impromptu purchases. I used to have one hanging up on the back of my apartment door, but despite my good intentions, I left the house without it exactly 100% of the time and eventually it was lost.