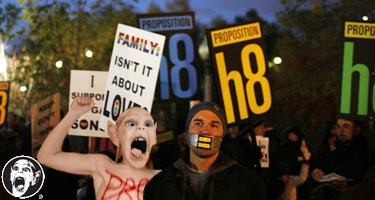 NEW YORK, NY – Bat Boy was spotted taking part in Proposition 8 protests this past weekend. All across the country, citizens united in protest of California’s Proposition 8 to strictly define marriage between a man and a woman, as well as other anti-same-sex marriage laws that were passed on November 4. Bat Boy was seen outside City Hall with “PROP 8″ with an X through it painted across his chest. While Bat Boy was unable to convey his feelings through words, he did send his high-pitched squeaks of dissent echoing across the plaza. Many mutants turned out for these protests. Mutant rights organizers explained that a number of mutants, such as the Manigator, are born from interspecial relations. Legalizing gay marriage is one step closer to allowing these unconventional unions to be officially recognized. Manigator was not present at the rallies, as he was too busy getting “tore up” with his sewer alligator cousins.