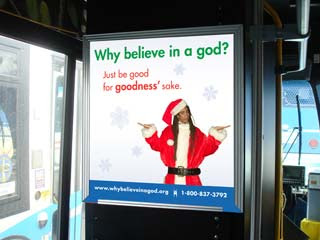 Christianist sites are up in arms over a new holiday advertising campaign in Washington, DC that asks “Why believe in God? Just be good for goodness’ sakes.” The ads are appearing on Metro buses throughout the city.

The American Humanist Association unveiled the provocative $40,000 holiday ad campaign Tuesday. In lifting lyrics from “Santa Claus is Coming to Town,” the Washington-based group is wading into what has become a perennial debate over commercialism, religion in the public square and the meaning of Christmas.

“We are trying to reach our audience, and sometimes in order to reach an audience, everybody has to hear you,” said Fred Edwords, spokesman for the humanist group. “Our reason for doing it during the holidays is there are an awful lot of agnostics, atheists and other types of non-theists who feel a little alone during the holidays because of its association with traditional religion.”

To that end, the ads and posters will include a link to a Web site that will seek to connect and organize like-minded thinkers in the D.C. area, Edwords said. Edwords said the purpose isn’t to argue that God doesn’t exist or change minds about a deity, although “we are trying to plant a seed of rational thought and critical thinking and questioning in people’s minds.” The group defines humanism as “a progressive philosophy of life that, without theism, affirms our responsibility to lead ethical lives of value to self and humanity.”

You may recall a similar campaign was launched last month in London.

Previous Shout It!
Next Ladies & Gentlemen…Baconnaise