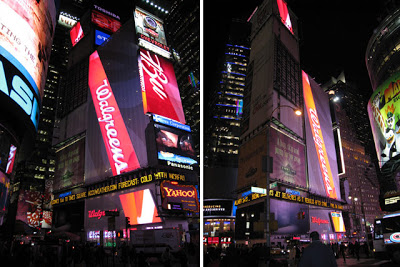 One of the world’s largest and brightest LED billboards lit up in Times Square last night. Via New York Times:

The new Walgreens sign going live in Times Square Thursday is not the largest LED-based sign in the world, but its developers believe that it is the most complex, both in terms of its construction and operation. Rising 340 feet high, the 17,000-square-foot sign wraps most of the facade of the One Times Square building. It combines a series of diagonal LED panels, plus 13 60-inch plasma displays to create a single moving image with 20 times the resolution of standard HDTV.

To make that happen, the sign’s developers, D3 LED, LLC used over 12 million LEDs, or light-emitting diodes. The higher up the sign, the further apart the LEDs were spaced; those parts of the sign closer to the street used a higher density to increase the effective resolution for nearby viewers. The trick was in combining the variable densities to create a uniform-sized image that could spread around the sides of the building and onto the plasma screens that adjoin the store’s entrance. The sign will display ad spots from Colgate, Kraft, Johnson & Johnson and L’Oreal, among other companies. To create the imagery, 150GB of information is transmitted every 30 seconds from 32 custom-built computers. Because so much information has to be transmitted so quickly, all of the imagery is sent in an uncompressed format; if it were compressed to save space, too much computing power would be need to uncompress the information. The range of colors that can be displayed far exceeds what a standard television can transmit and even exceeds the number that can be created by color printers..

Can’t wait to see it. Times Square is already so bright, the Times recommends sunglasses to look at the billboard at night.

Previous The Way You Mecca Me Feel
Next JMG: INTP