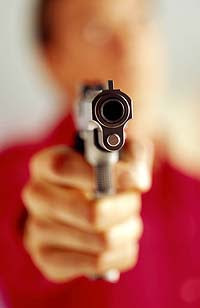 The lovely folks at Protect Marriage have sent letters to major corporations that have donated to No On 8 to demand a donation for themselves – or else face the wrath of an ad campaign denouncing them.

ProtectMarriage.com, the umbrella group behind a ballot initiative that would overturn the California Supreme Court decision that legalized gay marriage, sent a certified letter this week asking companies to withdraw their support of Equality California, a nonprofit organization that is helping lead the campaign against Proposition 8.

“Make a donation of a like amount to ProtectMarriage.com which will help us correct this error,” reads the letter. “Were you to elect not to donate comparably, it would be a clear indication that you are in opposition to traditional marriage. … The names of any companies and organizations that choose not to donate in like manner to ProtectMarriage.com but have given to Equality California will be published.”

The letter was signed by four members of the group’s executive committee: campaign chairman Ron Prentice; Edward Dolejsi, executive director of the California Catholic Conference; Mark Jansson, a member of The Church of Jesus Christ of Latter-day Saints; and Andrew Pugno, the lawyer for ProtectMarriage.com. A donation form was attached. The letter did not say where the names would be published.