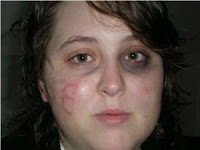 McCain campaign volunteer Ashley Todd, 20, of College Station, Texas claims she was using an ATM on the “wrong side of Pittsburgh” when a Huge! Scary! Negro! mugged her. After robbing her of $60, the mugger dragged Todd to her car and became so enraged upon seeing her McCain bumper sticker that he punched her in the eye and carved the letter “B” into her cheek with a knife.

The robber is described as a dark-skinned black man, 6 feet 4 inches tall, 200 pounds with a medium build, short black hair and brown eyes. The man was wearing dark colored jeans, a black undershirt and black shoes.

The Obama-Biden campaign released a statement, commenting on the attack. The statement said, “Our thoughts and prayers are with the young woman for her to make a speedy recovery, and we hope that the person who perpetrated this crime is swiftly apprehended and brought to justice.”

The McCain-Palin campaign also released a statement saying, “The McCain campaign is aware of the incident involving one of its volunteers. Out of respect, the campaign won’t be commenting. The campaign also confirms that Senator McCain and Governor Palin have both spoken to the woman.”

The letter B. As in “Barack.” Uh, only the “B” is carved backwards, like somebody was looking into a mirror when she did it. And the cut is even and shallow, like somebody didn’t want her face permanently scarred. Oh, and the attack happened just outside the range of the ATM’s surveillance cameras. Also according to Ms. Todd, her attacker was only wearing jeans and a t-shirt. In the 40-degree Pittsburgh weather.

After the Drudge Report jumped on the story with a 72-point red font headline, the news quickly spread to the conservative and PUMA blogosphere. From the PUMA site HillBuzz:

Obama supporters are truly the most despicable people we’ve ever encountered – and we worked the Kerry, Gore, and 1996 Clinton campaigns. We’ve never seen any political supporters mutilate anyone’s flesh before. If you vote for Obama, you condone this behavior, and empower the thugs who commit acts of violence like this in his name. Why hasn’t Obama come out to tell his followers to stop doing this? Obama must stop his followers from mutilating the flesh of those who oppose him. [Note to regular JMG readers: Check out the first commenter on the story. Heh.]

Purely by coincidence, Tawana Ashley had just started a Twitter account and the Smoking Gun posted her last three messages.

Three hours after a brutal assault and she’s happily Twittering away? Surprisingly, even some of wingnuttiest McCain flacks out there are calling “fake”. Michelle Malkin:

We have enough low-lifes and thugs in the world running loose and causing campaign chaos and fomenting hatred without having to make them up. I’ve been blowing the whistle on the real, left-wing rage not on the front page and in-your-face tactics throughout the election season. Hate crimes hoaxes — by anyone, of any political persuasion, and of any color — diminish us all. Either way, I hope that Todd gets the help she needs, that the whole truth comes out, and that justice is served on the perpetrator. Whoever he or she may be.

Pittsburgh cops aren’t buying the story and plan to polygraph her. But get ready for Ashley Todd to become a rallying point for the GOP. There’s already several thousand “outraged” comments on the Freepers threads about this. Here’s the story from Fox News:

UPDATE: From Todd’s MySpace page: “Lying is the most fun a girl can have without taking her cloths off, but its better if you do.”

UPDATE II: The unraveling has begun. Todd has changed her story several times. She now claims she was sexually assaulted and knocked unconscious and doesn’t recall the injuries to her face.