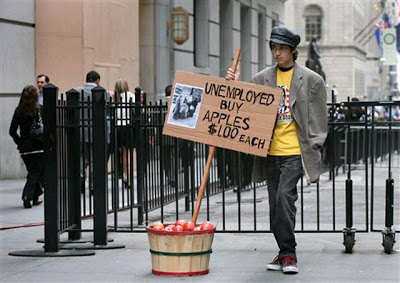 This 13 year-old history buff was reenacting the Great Depression in front of the Stock Exchange yesterday. Today Congress will take another run at the Great Bailout.

Top lawmakers said the Senate proposal, worked out after a day of behind the scenes maneuvering, would include tax breaks for businesses and alternative energy and higher government insurance for bank deposits.

“It has been determined, in our judgment, this is the best thing to move forward,” said Senator Harry Reid, Democrat of Nevada and the majority leader, in announcing the surprise move.

The senators issued no details of their proposal and said none would be available until Wednesday. The lawmakers were gambling that the tax package would appeal to lawmakers who helped sink the measure in the House on Monday, without driving off Democrats who have opposed extending the tax incentives without offsetting spending cuts elsewhere.

House Democratic leaders reacted cautiously to the new approach, with Representative Steny H. Hoyer of Maryland, the majority leader and a chief advocate of paying for the tax breaks, saying, “I am talking with my House colleagues about the Senate action and how to best proceed.”

But House Republican leaders, who said they had been advised about the Senate plan, said the new elements would appeal to their rank-and-file, which voted strongly against the legislation Monday.

I’m guessing it will pass this time.