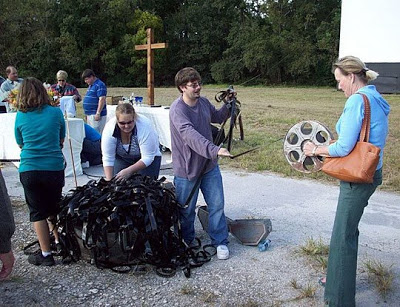 Until Sunday, the Rev. Mark Eldredge joked that his Westside church had one of the largest pornography collections in Jacksonville. Members of Christ Church Anglican discovered reel upon reel of ’70s- and ’80s-vintage X-rated movies recently when they took over the old Playtime Drive-In on Blanding Boulevard a few weeks ago. The Playtime showed X-rated movies in the ’70s and early ’80s, prompting police raids and protests, before switching to more traditional fare.

But for Eldredge and the 300-member congregation, ridding their property of the film was no joking matter. It was so serious, they built an entire service around it Sunday afternoon, complete with a ceremonial burning and a “holy hose-down” with water from a Jacksonville Fire and Rescue truck blessed by the priest.

“You guys can be a part of making this land holy,” Eldredge told his flock before he used a brass candlelighter to ignite a bonfire containing unrolled reels of film. “To have a piece of property and take it from unholy to holy is awesome.” As the film burned, three Jacksonville firefighters stood by. Then Eldredge blessed the water in their truck, and they cleansed the property by hosing it down.

Seriously, that stuff could have been sold to collectors and made thousands for the church to….oh, I don’t know…..feed the homeless?
(Tipped by JMG reader Chris in SF)