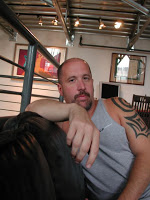 I totally missed it when I was looking at the list of his lobbying clients, but the Washington Post and others are reporting that openly gay McCain chief of staff Mark Buse once worked for Freddie Mac as a lobbyist.

When mortgage giant Freddie Mac feared several years ago that Sen. John McCain was too outspoken on the issue of executive pay, it pinpointed a lobbyist known for his closeness to McCain and hired him to work with the senator.

Mark Buse, a longtime McCain adviser who had been staff director of the Senate commerce committee, signed on as a Freddie Mac lobbyist, and his firm, ML Strategies, earned $460,000 in lobbying fees in late 2003 and 2004, according to lobbying disclosures. Buse is now chief of staff at McCain’s Senate office.

Buse was one of many strategic hires made by Freddie Mac in its efforts to sew up support and manage opponents on Capitol Hill, a push that peaked in 2004 with the retention of 34 outside lobbying firms. Over the past decade, Freddie spent more than $95 million on lobbying, while its sister company, Fannie Mae, spent more than $79 million.

The story of how Buse came to get involved is emblematic of the interconnections among Fannie, Freddie and the lawmakers whose support was critical for their business.

McCain campaign spokesman Brian Rogers said the hiring of Buse did not influence McCain. “I think the reality is that John McCain takes positions, you know, based on what he believes is in the public interest, period,” Rogers said. “If these folks thought they were getting something out of John McCain . . . it’s not based in fact.”

Buse was providing Freddie Mac “with advice on how to deal with issues of concern to them, you know, both in the commerce committee and in the Senate at large,” Rogers said. Through the McCain spokesman, Buse declined to comment.

Freddie Mac’s interest in Buse dates back to mid-2003. That May, McCain presided over a hearing on executive pay at which he condemned “a disconnect between CEO pay and performance at many of America’s corporations” and said that “these kinds of excesses are making a lot of Americans angry.”

“Senator McCain was talking about limiting executive compensation, and Buse was retained to nip that in the bud,” said a former lobbyist who insisted on anonymity because of continuing relationships with the companies.

The commerce committee, which McCain chaired, considered taking up legislation to address Fannie and Freddie in 2003 but refrained from doing so because it lacked jurisdiction, Rogers said.

McCain continued to talk about the compensation issue. But inside Freddie Mac, Buse’s effort was viewed as “hugely successful,” a former Freddie Mac lobbyist said. “The statements didn’t go away completely, but in terms of Senator McCain doing anything about it, it just never materialized. As far as I know, Buse was the only person working that issue for Fannie or Freddie, so he got a lot of credit internally for the results.”

As a Freddie Mac lobbyist, Buse participated in a meeting on executive compensation with aides to members of the commerce committee, said sources informed about the matter who insisted on anonymity to avoid professional repercussions. Freddie Mac spokeswoman Sharon McHale said she was unable to get any information on Buse’s relationship with the company.

McCain co-sponsored a bill to overhaul regulation of Fannie and Freddie in September 2003 and again in 2006. “He helped sound the alarm on the risk that Fannie and Freddie posed to the taxpayers unless they were reformed,” Rogers said. McCain also advocated requiring companies to count stock option awards as expenses, a move opposed by many corporations because it could depress their earnings and make options less plentiful.

The lobbying reports filed by Buse’s firm say his work for Freddie Mac involved “general issues affecting the mortgage industry.” The forms listed four other ML Strategies employees as lobbyists for Freddie Mac, but a spokeswoman for the firm, Gina P. Addis, referred questions about their work to Buse.

Buse was nicknamed “The Ferret” because he helped his boss, McCain, find pork-barrel provisions buried in legislation. McCain has said he considered Buse to be like a son.

Buse left the commerce committee staff to lobby, signing on clients as diverse as oil giant Exxon Mobil, Wall Street firm Goldman Sachs and the Pharmaceutical Research and Manufacturers of America, according to the government records. He also represented telecommunications clients affected by the committee.

Buse returned to McCain’s office this year as chief of staff. Davis, the McCain campaign manager, last week defended his long association with the Homeownership Alliance, saying he served as “the public face of an organization that promoted homeownership.” But people who worked for Fannie Mae, Freddie Mac and the Homeownership Alliance said the group’s central mission was promoting Fannie and Freddie.

I could kick myself for missing Freddie Mac on that list.

Previous Intrepid Returns To Manhattan
Next Inside Sarah Palin’s Mind