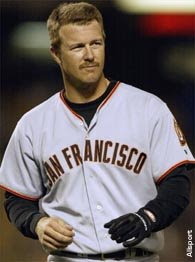 Jeff Kent, 40, who played second base for the Los Angeles Dodgers this season, has stepped into the emotional world of same-sex marriage, giving $15,000 to backers of the California proposition on Tuesday’s ballot that would ban it. In a disclosure filed with the California secretary of state, Kent listed his occupation as professional baseball player for the Dodgers and his address as Austin, Texas. He gave the $15,000 in a transaction dated Monday but which only now is public.

Kent, who is a Hall of Fame shoo-in, was my favorite player when he played for San Francisco. He’s expected to announce his retirement at any moment, so I guess he feels safe to make such a controversial gesture. I don’t think we’ve heard of any other professional athletes donating to Yes On 8, have we?