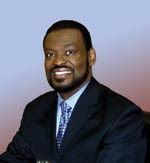 While the economy mess has made the MSM too busy to pay much notice to the revelation that John McCain has a gay chief of staff, notorious homophobe Bishop Harry Jackson has taken interest. Jackson is the pastor of Hope Christian Church in Maryland and is on the board of the National Association of Evangelicals. Jackson on the Mark Buse revelation:

“The pro-gay, anti-church groups see themselves in a death-lock in a war — and they hope to create a sense of disunity among Christians around [the question] ‘can we really trust McCain?'” According to Jackson, the announced “outing” of Buse is a calculated political move. “I think this attack has come at this moment because of the issues of marriage amendments in these states and the issue of a pro-family agenda,” the pastor suggests. “And I wish [McCain] was more engaged positively, because he’s getting the negative attack no matter what.”

On Friday Jackson appeared on Michelangelo Signorile’s show on Sirius XM to complain that the Buse revelation should have McCain more forcefully defending “traditional” marriage so people don’t think he’s soft on gay issues. (Who could think THAT?) But Jackson also admitted that the right is fighting a losing battle, at least on civil unions.

“My concern about John McCain stepping up and being articulate about the marriage amendments is more about protecting the definition of marriage as one man and one woman as cultural guardrails…The reason I say I will work with civil unions, etc. — that may not have been my original position, but I think it’s a reality. We have had laws in New Jersey, all over the country. The reality is gay civil unions are going to be the law of the land all over the country…You may call it movement [on my part.] I call myself a realist…I think this would be a split issue [on the Christian right], a lot of people would disagree with me. But I think we’re embroiled in a battle that’s unfolding.”

Jackson then complains that Sarah Palin was “wishy-washy” on gay marriage during her debate.

“A lot of folks were upset that she didn’t say there is a marriage amendment on the ballot in Florida, California and Arizona…She missed an opportunity to say ‘I’m for marriage’…She could have defined that thing clearly and she would have a lot more people enthusiastic about her campaign. There have been people [grumbling]…I do think she seemed a little wishy-washy and unclear on the marriage issue. She left making it sound like she and Mccain and Biden and Obama were exactly the same and they’re not.”

Whee! In-fighting amongst the fundies! Listen to Jackson’s interview on Signorile’s site.