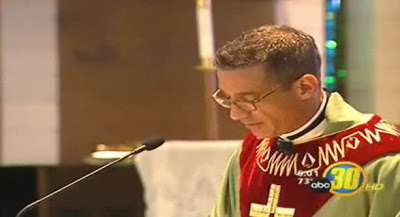 Our own Father Tony has had a conversation Father Geoff Farrow, the brave Fresno, California priest who sermonized against Proposition 8 from his pulpit on Sunday. In a television interview after the service, Father Geoff then came out. Father Tony:

Father Geoff is unsure of his future, but he says that for the first time in years he feels at peace with himself while fearful about his ability to deal with the strife and tumult that is about to come his way. He said, “I feel like the little boy in the crowd who says the emperor is naked.”

We talked about the fact that most priests are gay, and about the power structure that keeps them silent when in their hearts they know they should be working to overturn the ridiculous mistreatment of gay people by the Catholic Church. He said that at a gathering of priests that followed the news about his sermon, the bishop was assured by many of the priests that Father Farrow was wrong and should be punished. This is disgusting and yet so very believable.

I wish I could shout out to all the thousands of gay priests out there. This is your chance, guys. Father Geoff took the first shot. He made the bold jump. Are you going to let him stand there alone and vulnerable? Are you going to turn your back on him? Or, will you stand up and be counted? Will you use your pulpits to support what he has begun?

The bishop can get away with suspending one man, but he cannot suspend all of you.

Do the right thing. This is why you were ordained.

Read the rest of Father Tony’s post. Father Geoff has begun blogging his experience, you can follow along with his story here.

Previous Oops! McCain Refers To Republicans As “My Fellow Prisoners”
Next Wanda Sykes And Hillary Duff Fight Teen Usage Of “That’s So Gay”