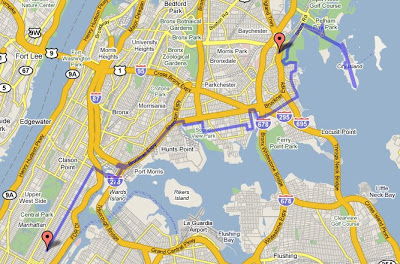 Yesterday Dr. Jeff, Ned, Craig and I did another seven hour marathon on our bikes, this time exploring the mostly scary, but lotsa pretty Bronx. We started by taking the 6 train to its terminus at Pelham Bay Park, then biked out to City Island, which is a lovely New England-style fishing village in Long Island Sound. City Island is tiny, but filled with picturesque seafood shacks, antique shops, marinas, and yacht clubs.

After City Island we rode through miles of public housing projects, where residents eyed us suspiciously (four white guys with short hair) as probable cops. Outside the Castle Hill Houses, three young men tipped their ballcaps at us. “Hello officers.” We went along the waterfront where the Throgsneck and Whitestone bridges are, then looped around the Hunts Points industrial area across from the massive prison complex of Rikers Island, where the security guard at a giant produce warehouse pointed out the Barge, a mainland correction facility “where they keep all the snitches.” Then we visited Barretto Bay Park and gazed out at North Brother Island, where they used to keep Typhoid Mary. The famous 1904 General Slocum incident, the worst public disaster in NYC before 9/11, happened right off Baretto Bay Park. On the way back, we came across the below burgundy van. If you’re an Ohio tourist and are missing your vehicle, we know where it is.

The ride was 22.5 miles (not including the subway portion) and coming back over the Triborough Bridge, I really didn’t think I was gonna make it home. Oy. But it was a beautiful day and we discovered some quite lovely aspects of the Bronx. I know that Queens is the most ethnically diverse borough of NYC, but the Bronx gets the prize for most diverse landscape. We saw everything from miles of hardscrabble residential areas to desolate warehouse districts to horse stables to perfectly manicured surburbia. And we only really saw the waterfront areas. Lots more photos here.