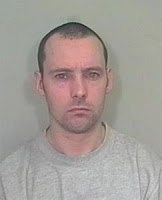 30 To Life For Gay Cannibal The guy who won Mr. Gay UK in 1993 has been sentenced to 30 years in prison for killing, dismembering, and cooking his former lover.

A former winner of a gay beauty contest has been sentenced to life in prison for murder. Anthony Morley, who won Mr Gay UK in 1993, will serve at least 30 years in jail. On Friday Morley, 36, was found guilty at Leeds Crown Court of the murder of Damian Oldfield.

The jury took less than three hours to reach their verdict. Mr Oldfield, 33, sustained more than 30 stab wounds, some of them post mortem, and pieces of his leg and chest had been sliced off. His jugular vein had been cut open in the attack at Morley’s home.

Police found pieces of muscle, skin and flesh under Mr Oldfield’s naked body, which was discovered by officers in Morley’s bedroom in his flat in Harehills on April 24th. Morley, a chef, had seasoned and cooked some of Mr Oldfield’s flesh and chewed a piece before discarding it. Chunks of cooked flesh were found on the chopping board in his kitchen.

Judge James Stewart QC, passing sentence today, said the case was “one of the most gruesome murders I have ever encountered in my professional life. “Not only did you murder this man by cutting his throat and stabbing him you then cooked him up and tried to eat him.” The judge said Morley had committed a “cold-blooded, savagely executed murder.” “You then, when satisfied he was dead, cut chunks from his body and cooked it, using your skill as a chef, with oil and herbs, sliced it as if a steak and tried to eat it. It was not to your liking so you spat it out and discarded it in your waste bin.

ALSO RELATED: Those damned cannibals are destroying the traditional family! 100% of cannibal “marriages” end in dinner!

Previous Three Gay Divas Plus One
Next Wingnuts: Gays Will Silence The Church