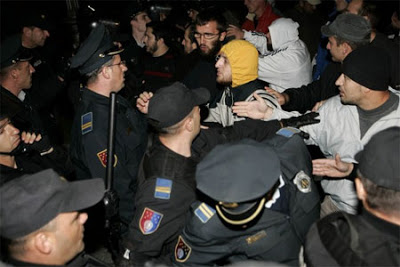 Dozens of homophobic hooligans attacked participants of Bosnia’s first-ever gay rights festival in Sarajevo on Wednesday, leaving at least two journalists and one police officer injured. The scuffle broke out at the end of the opening ceremony of the four-day festival in front of the Academy of Fine Arts in downtown Sarajevo.

“When I was getting out of the academy, I was suddenly struck in the back,” Pedja Kojovic, a local journalist, told AFP. “Three other people then came running and beat me up.” Emir Imamovic, a journalist who tried to help Kojovic, was severely beaten, police said.

A heavy police deployment prevented more violence from spoiling the event, with a security cordon keeping protestors shouting “kill the gays” and “Allahu Akbar” (a Muslim expression meaning God is Great) at bay. A police officer on the scene said groups of anti-gay protestors had spread to nearby streets and were attacking people. A police officer was struck in the head during the clashes.

The hooligans, some with their faces covered, and other with long beards, were yelling insults at the festival participants and shouting, “Allahu Akbar!” They also dragged people out of their cars and physically attacked others in the festival on the street. Six people were taken to the hospital with head injuries. The person suffering the most serious wounds was a Danish citizen. One police officer was also injured in the clashes with the hooligans. Police arrested eight attackers.

Last week, “Death To Gays” posted began to appear around Sarajevo, placed by Islamicists who were angry that gay pride was to occur during Ramadan.